INITIATIONS OF THE PATH OF ENLIGHTENMENT

Buddhist Stream Entry Part 2: Stream entry and After - Meditational Alignment with a Stream of Energy From Heaven to Earth - The Antahkarana

Buddhism Stream Entry Pt 3: Meditational Alignment with a Stream of Energy From Heaven to Earth - The Antahkarana

CHAKRAS EXTERNAL TO THE BODY, Vedic-Agamic Cosmology - Chakras above Sahasrara Chakra and Below Muladhara Chakra

As we awaken the pairs of chakras we get progressive initiations on the path of enlightenment.

Initiation 2. Vishuddhi the throat chakra pairs with Swadisthana the Relationship Chakra giving Initiation 2, the Mastery of Relationships which many people are going through at this time. Once we learn how to connect and take our energy from the Center of the Universe then we have no need to connect our chakras with horizontal Energy Connections to others to give and receive energy. We can become a giver of energy as we channel the energy of the soul. There is no more need to be an Energy Vampire with the Energy Enhancement Meditation Course!! Gradually with Initiation 4 of Energy Enhancement Level 1 we wean ourselves away from needing to take energy from others. A Saint is one who gives 100% 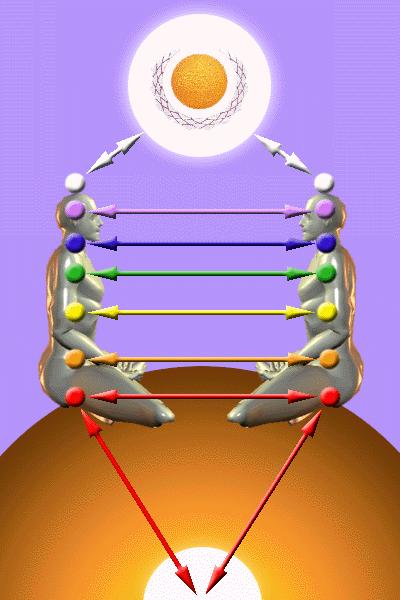 Initiation 3. Sahsrara and the Soul pairs with Muladhara and Kundalini Chakra in the Center of the Earth giving Initiation 3, commonly called Enlightenment or Soul Fusion. The Soul is purified and integrated with all the purified chakras in the body and with Kundalini Chakra in the Center of the Earth. The mind has only one personality, the Soul infused personality. All sub-personalities and Implants and Energy Blockages have been integrated by the Seven Step process of Energy Enhancement. Initiation 3 is commonly called Enlightenment, but there are Initiations Higher than Enlightenment...

Initiation 4. The Monad Pairs with a purified chakra beneath the Centre of the Earth Giving Initiation 4 - Monadic Infusion. The monad is a group of Souls and the Monadically Infused will act as a Guru whose job is the illumination of their Monadic group

Initiation 5. The Logos pairs with a deeper purified chakra beneath Kundalini Chakra in the Centre of the Earth (Vitriol - Visita Interiore Terrae Rectificando Invenies Occultem Lapidem) giving Initiation 5 - Logoic Infusion. The Logos is a group of all the Monads on this Planet about 200 Billions of souls. The Logoic infused will be World Teachers like the Christ or the Buddha, ascended masters whose consciousness has arisen to live permanently in the higher chakras on the Other Shore, on the other side of the Abyss, in Prajna Paramita - the Highest Wisdom Chakras.

"Love is the Law. Love under Will is the whole of the Law"

<>The higher chakras have been experienced by a rare few (Note: everyone who practises Energy Enhancement will have deep experience of the Higher chakras even using only Level 1 of Energy Enhancement)  as a conglomerate of nadis, spiritual nerve currents comprising the Antahkarana, which when stimulated and developed by many samadhi experiences, slowly descend into the mental and astral bodies purifying them, effecting a permanent transformation of the entire being in Enlightenment. 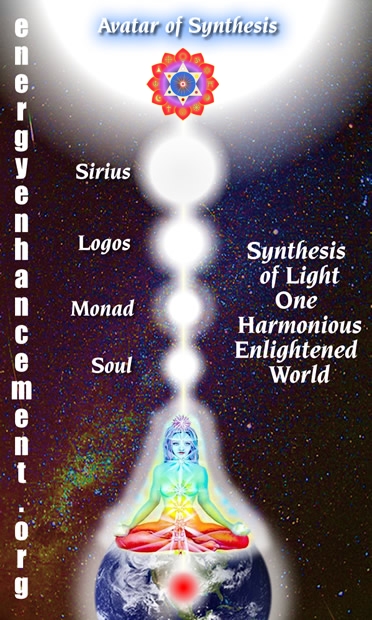 CHAKRAS EXTERNAL TO THE BODY

ANCIENT INDIAN REPRESENTATION OF THE CHAKRAS EXTERNAL TO THE BODY 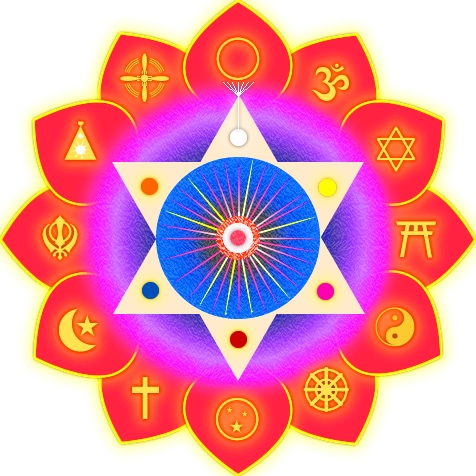 HIS is the Hindu cosmology or Vedic-Agamic Cosmology; The Inner and Outer Universe  correlating the various divisions and categories of manifestation, as well as the bodies, sheaths,chakras and states of consciousness of the soul. It is organized with the highest consciousness, or subtlest level of manifestation, at the top, and the lowest, or grossest, at the bottom.

lokas (3 worlds & 14 planes): This Vedas, Classically name only 14 chakras missing out seven chakras above the head. In reality there are an Infinity of Chakras ending in God, Atma, Purusha.

These are the classical divisions of consciousness, traditionally numbering 14, as listed. A simpler breakdown shows the three lokas: causal, subtle and gross. The 14 planes correspond directly to the chakras, psychic force centers within the inner bodies of the soul. The 14 chakras are "doorways" within man to each of the 14 planes.

tattva (36 evolutes): The 36 tattvas, are the basic "building blocks" of the universe, successively grosser evolutes of consciousness. These are in three groups.

Below we provide below a deeper elucidation of the chakras and the three primary nerve currents of the inner body: ida, pingala and sushumna.

The chakras are nerve plexuses or centers of force and consciousness located within the bodies of man. In the physical body there are corresponding nerve plexuses, ganglia and glands. The seven principal chakras can be seen psychically as colorful, multi-petalled wheels or lotuses situated along the spinal cord. The seven lower chakras, barely visible, exist below the spine connecting with the earth Chakra, Kundalini Chakra in the Center of the Earth.

The Chakras Above sahasrara chakra: The most subtle of the chakras lie above the crown chakra at the top of the head, the higher the Chakra the more powerful it is, the more functionality it has, the higher its frequency. As we exist within an Antahkarana tower of energy which stretches from Earth to Heaven, it is really good to be able to talk to and control each chakra. The way to do this is to remove all Negative karmic mass, all energy blockages which block the communication. Like the tower of Babel.

Agamic Hindu tradition delineates seven levels of the rarified dimensions of paranada, the first tattva and the highest stratum of sound. They are: vyapini, vyomanga, ananta, anatha, anashrita, samana and unmana. There are 36 tatvas or Octaves containing 7 chakras each although God is infinite, there are an infinity of chakras. 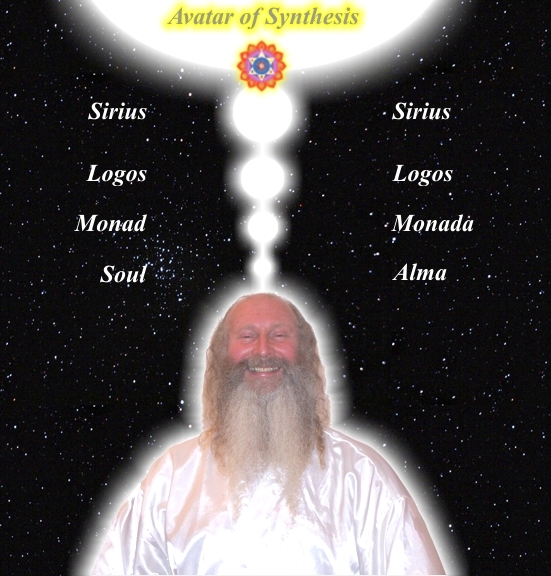 SATCHIDANAND CONNECTED WITH THE AVATAR OF SYNTHESIS

PAIRS OF CHAKRAS - In reality we are learning to use pairs of chakras above and below. There are an infinity of Chakras but integration and purification of only a few will give vast influence for the benefit, evolution, integration of humanity and the Universe.

THE HOLY TRINITIES - In reality, heaven and earth are not separate. There are three things. There is trinity. They are connected by a column of energy - the Anthkarana or the holy spirit, which contain all the infinity of chakras stepping down the energy from God.

The trinities are all the same as earth, heaven and the connecting tower of the Antahkarana.

THE TRINITIES - Sat chid ananda, Om is A U M, Hum is H U M, Amen is A M eN, The Hindu trinity of Brahman, Shiva, Vishnu whose incarnation was Krishna, The Holy Trinity The Father, Son, Holy Spirit, The Holy Grail is the purified mind or Chitta which is filled with the Blood of Christ or Ananda or Holy Spirit.

THERE IS ONLY ONE - In this way there is one construct and we with our seven chakras are a part of that construct, that tower, that line of energy. And if we learn how to enter into any chakra, high or low, then we can learn how to influence, control that chakra by purifying it of all negativity. This is the path of evolution, of enlightenment.

ENERGY ENHANCEMENT MEDITATION - What I mean is, if you start with this meditation of Energy Enhancement, results are guaranteed!! See our testimonials!!

The Seven Chakras within the Body, when Purified will give these powers

1. Muladhara Base Chakra Memory-time-space. The abode of memory, the foundation of all human knowledge, this center is also the seat of our basic instincts of survival, sexuality and others. Meaning: "foundation." Location: base of spine. Deity: Ganesha and Brahma. Shakti: Dakini. Color: red. Vehicle: elephant. Petals: four. Plexus: sacral or pelvic. Element: Earth. Plane: Bhuloka.

Seven Chakras Below the Muladhara like all of the chakras in an unenlightened person are filled with darkness or with Trauma-Formed negative Karmic mass and so have the possibility of being used in bad ways - until purified by grounding all the negative energies, the negative possibilities will be seen. Until purified the chakras below muladhara will have the following bad effects...

1. Atala Fear and lust. As awareness slips below the muladhara into fear, indecision stymies ambition and a licentious lifestyle dulls the pranic sheath. Meaning: "without bottom." Plane: Put.

2. Vitala Raging anger. Dark red-black streaks emblazen the aura when awareness enters this furnace of instinctive fire and then injures others. Meaning: "region of the lost." Plane: Avichi.

3. Sutala Retaliatory jealousy. Wanting what others have and preoccupation with what one is not gnaws at the mind, instilling ill-will. Meaning: "great lower region." Plane: Samhata.

5. Rasatala Selfishness. An imprisoning veil of "me" and "mine" blinds the natural instinct to care for others. Every action is for personal gain. Meaning: "lower region of moisture." Plane: Rijisha.

7. Patala Malice and murder. A virtual hell of hate, hurting, killing for its own sake without remorse. Reason rarely reaches this region. Meaning: "lower region of wickedness." Plane: Kakola.

SAT IS TRUTH IN SANSKRIT, THE ANTAHKARANA AND THE CHAKRAS ABOVE THE HEAD

Psychic nerve currents through which prana flows from the central spiritual sun, in the center of the Universe, God in any one of his 10,000 names.

Ida and pingala intertwine the spinal column (shown diverging far outside the sushumna for sake of illustration).

They begin at the muladhara chakra, cross at the manipura and the vishuddha chakras and meet at the sahasrara.

Ida nadi, pink in color and feminine in nature, the Moon, connected with the parasympathetic nervous system and the vagus nerve which controls the speed of the heart, is the channel of physical-emotional energy. It flows downward, ending on the left side of the body.

Pingala nadi, blue in color and masculine in nature, The Sun, connected with the alpha male sympathetic nervous system and the fight or flight reaction, is the channel of intellectual-mental energy. It flows upward, ending on the right side of the body.

THE CIRCULATION OF THE ENERGIES Therefore there is a circle of energy between heaven and earth which exists in the center of the Antahkarana Tower. Around both ida and pingala is a spiral of energy therefore two intertwining spirals - like DNA - to make one tower. This image is the secret of the Kundalini Kriyas and the Alchemical Taoist Meditational Orbits - both taught in Level 1 of Energy Enhancement meditation.

Sushumna, the major nerve current, pale yellow in color, becomes activated when Ida and pingala have been harmonised and integrated, usually by Alternate Nostril Breathing and Pranayama, holding the breath, as taught in Energy Enhancement Pranayama - wait for the DVD! It passes through the spinal column from the muladhara chakra at the base to the sahasrara at the crown of the head. It is the channel of kundalini. Through yoga, the kundalini energy lying dormant in the muladhara is awakened and made to rise up this channel through each chakra to the sahasrara chakra. 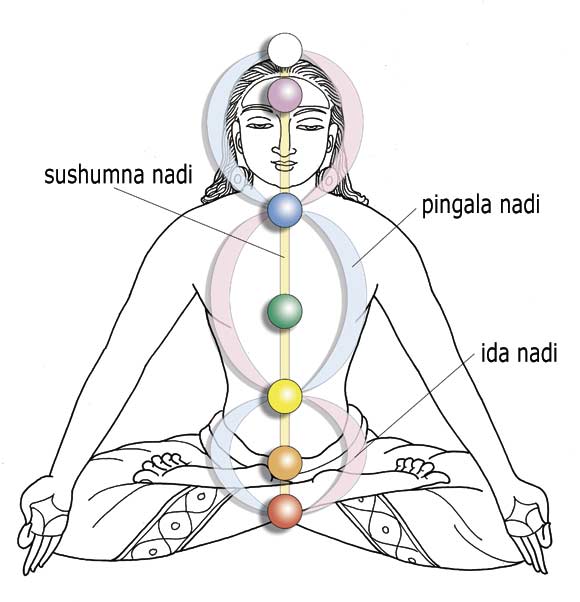 IDA AND PINGALA ARE THE SNAKES OF THE CADUCEUS 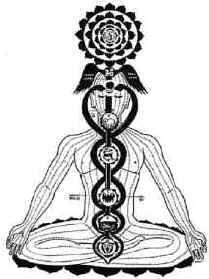 THE CADUCEUS FROM MERCURY THE GREEK GOD ORIGINALLY CAME FROM INDIA

IT SHOWS THE ENERGIES OF IDA AND PINGALA - THE TWO SNAKES - INTERTWINING AROUND THE CHAKRAS OF THE PHYSICAL BODY AND SHOWS HOW THE ANTAHKARANA GOES HIGHER INTO THE CHAKRAS ABOVE THE HEAD. THE STAFF OF THE CADUCEUS IS THE ANTAHKARANA, THE COLUMN OF ENERGY BETWEEN HEAVEN AND EARTH. THE FAT PIPE CHANNELING THE HOLY SPIRIT.

GET THE BOOK "SUPER ENERGY AND SACRED SYMBOLS FOR PERFECT WISDOM ENLIGHTENMENT" BY SATCHIDANAND FROM AMAZON - CLICK HERE!! 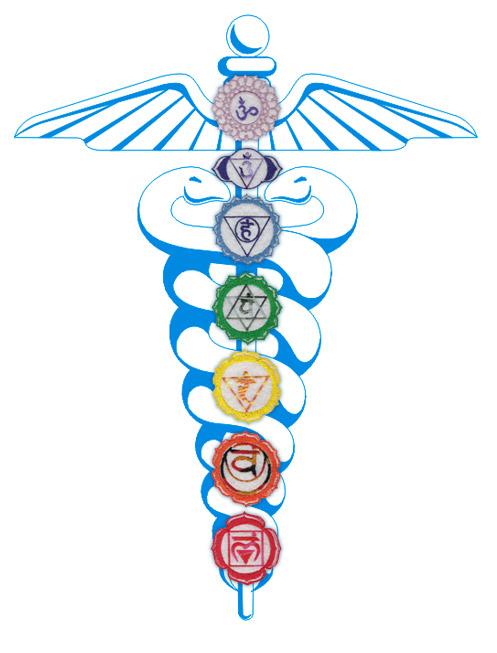 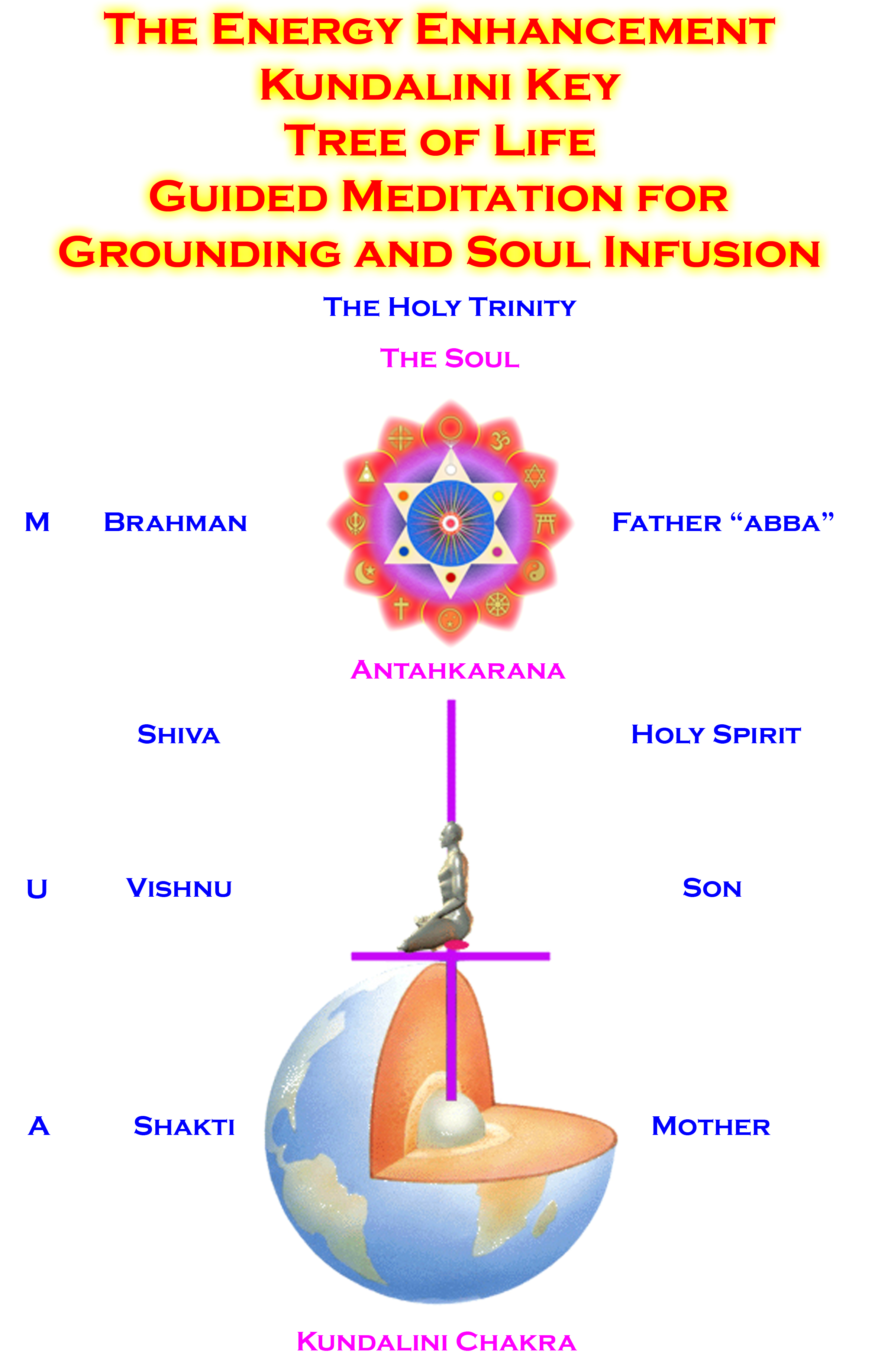 Buddhist Stream Entry Part 2: Stream entry and After - Meditational Alignment with a Stream of Energy From Heaven to Earth - The Antahkarana

Buddhism Stream Entry Pt 3: Meditational Alignment with a Stream of Energy From Heaven to Earth - The Antahkarana

CHAKRAS EXTERNAL TO THE BODY, Vedic-Agamic Cosmology - Chakras above Sahasrara Chakra and Below Muladhara Chakra

LIVE COURSES
The Energy Enhancement Levels 1 and 2 - 15 Initiation Energy Enhancement Course is
available over 28 Days - Get in touch by email to design your course.
2009
https://www.energyenhancement.org/Argentina_EnergyEnhancement_HotelPlazaSol_Rosario_Meditation.htm